How to Hike the Snowdon Rhyd Ddu Path

What is the Snowdon Rhyd Ddu Path? 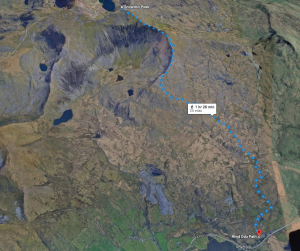 The Snowdon Rhyd Ddu Path is one of only two paths that ascends the western slopes of Snowdon. It is one of the quieter routes to the top of Yr Wyddfa (Snowdon) – the highest mountain in Wales. This is a track often walked by Welsh locals wishing to avoid the crowds.

This trail originally had a different name and was called the Beddgelert Path. At this time, it was primarily used as a pony track rather than a hiking trail. This original trail still forms the opening section of the Snowdon Rhyd Ddu Path.

Snowdonia is home to the UNESCO World Heritage slate mines. A sample of this history can be seen during the first mile of the trail. The path follows the old access route for the Bwlch Cwm Llan slate quarry. Along this section, there are spectacular views over the hills of Nantlle and up to Moel Hebog.

The Snowdon Rhyd Ddu Path is unique because it doesn’t join up with the other trails at Bwlch Blâs. Instead, it approaches Snowdon from the south side over Clawdd Coch (931 m). This offers a more unusual route for tackling Snowdon.

How to reach the Snowdon Rhyd Ddu Path? 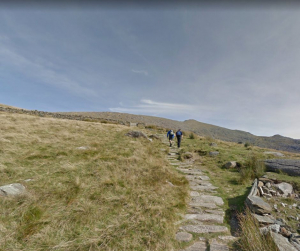 Rhyd Ddu is a small hamlet nestled on the B4418 and A4085 crossroad. It has access routes from the north, south, and west for those who are driving. However, as Snowdonia National Park is situated in the top corner of Wales and fringed by the Irish Sea, this is still a relatively challenging location to reach. Parking is available at the Maes Parcio Rhyd Ddu lot.

As with the other trailheads around Snowdon, the Snowdon Rhyd Ddu Path can be reached by bus from the nearby towns of Caernarfon and Porthmadog. The Sherpa Bus Service runs a loop around Snowdon Massif linking together all the hiking trails.

Alternatively, this trailhead can be reached by the Welsh Highland Railway. This is a 25-mile heritage railway that joins the towns of Caernarfon and Porthmadog – from the Menai Strait in the north to Afon Glaslyn in the south. There is a designated stop at Rhyd Ddu which makes for a magical entrance to the trail.

How to Navigate on the Snowdon Rhyd Ddu Path?

Rhyd Ddu is in the basin of a valley alongside Llyn y Gadair. This small lake acts as a confluence for numerous rivers and streams flowing down from the surrounding peaks. Next to the lake, there are two entrances to the trail: the Maes Parcio Rhyd Ddu parking lot on the A4085, and the trailhead up the road in Rhyd Ddu.

The two routes quickly merge before snaking their way up the mountainside. Initially, the trail is wide and easy to follow but it soon narrows as it reaches a plateau. This area, known as Rhos Boeth, is the site of some stone ruins previously used by the Victorians to hitch their ponies.

From here the path becomes much steeper. There are some sharp hairpin turns on the trail before reaching the first summit of Clawdd Coch. The Snowdon Rhyd Ddu Path then traces along the Bwlch Main ridge to join the Watkin Path at the South Ridge.

The two paths head north to the Hafod Eryri Summit Visitor Centre and the peak of the mountain. Some hikers choose to head back along the Snowdon Ranger Path. This offers a different route on the descent and finishes only 1.5 miles north of the original Snowdon Rhyd Ddu Path.

The Snowdon Rhyd Ddu Path is a challenging hike. Each trail up Snowdon requires hikers to climb nearly 1,000 metres of ascent and battle with challenging weather conditions. Fortunately, like most of the main trails, this route is also marked and maintained.

The Snowdon Rhyd Ddu Path does have one section of high exposure. After summiting Clawdd Coch, the Bwlch Main ridge must be crossed to reach Snowdon. This section has steep drops and involves picking your way carefully along a sloping escarpment.

For the Snowdon Rhyd Ddu Path you may want to carry a GPS navigation device with you –or at least a map and compass. Although the trail is easy to follow in the lower sections, there are a few areas where the path branches off in different directions.

A GPS device or a navigational app on your phone can prevent you from taking the wrong turn. Devices like the Garmin InReach are popular navigational tools but they’re expensive. Alternatively, apps like AllTrails can be used to navigate directly from your phone.

In Rhyd Ddu, there’s the Tŷ Mawr B&B and Tea Room which serves a hearty breakfast to fill your stomach before your ascent. After a successful summit, you can then visit the popular pub, the Cwellyn Arms. This is a bistro pub with good food and great ales, all set inside a stone building containing roaring fireplaces. Perfect after a bracing hike in the cold and rain!

Aside from these two spots, there are few other options for food and drinks. If you want snacks on the trail, plan to stock up before the hike. This route will take you the best part of a day so make sure you bring plenty of water and food for the trail. There are toilets and a Summit Café at the peak of Snowdon.

This trail has tougher sections than many of the other Snowdon trails. In parts, you will have to scramble over rocks and follow a narrow path along a ridge. As a result, make sure you’re wearing grippy footwear that you’re comfortable hiking in. The rocks can become very slippery in bad weather and visibility can be poor at times. Make sure you bring waterproofs, attempt your summit in the morning, and try to hike in pairs.

How to Hike the Snowdon Watkin Path

How to Hike the Scafell Pike Corridor Route
Scroll to top

Because these cookies are strictly necessary to deliver the website, refuseing them will have impact how our site functions. You always can block or delete cookies by changing your browser settings and force blocking all cookies on this website. But this will always prompt you to accept/refuse cookies when revisiting our site.