How to Hike the Scafell Pike Corridor Route

What is the Scafell Pike Corridor Route? 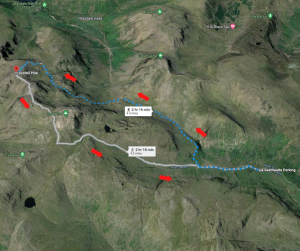 The Scafell Pike Corridor Route is a hiking trail in the Lake District National Park. It is a path that ascends Scafell Pike, the highest mountain in England and the 3rd highest peak in the UK. It offers a more challenging route up this epic summit for experienced ramblers.

The Scafell Pike Corridor Route has two possible starting locations. There’s the traditional starting point from Seathwaite in Borrowdale (via Sty Head), or there’s the alternative path that departs from Wasdale Head.

This guide is going to focus on the trailhead at Seathwaite as this is the more exciting route. The Scafell Pike Corridor Route is a long and involved trail. It is a traverse path that has some precarious rocky sections and a few exciting gully crossings! The path summits two additional Lakeland crags, Great End and Broad Crag, as well as Scafell Pike.

The Lake District is a UNESCO World Heritage Site and a globally renowned nature area. The poet Wordsworth described it as “The loveliest spot that man hath found.” It’s easy to see why, with its quaint stone villages, placid lakes, and rippling mountains. And what better way to see the Lake District than from its highest peak!

How to Reach the Scafell Pike Corridor Route?

Even for a National Park, Scafell Pike is surprisingly hard to access. The adjacent valleys are much more established than Borrowdale. There are towns sprinkled throughout Cumbria with transport routes available, however, the hamlets of Seathwaite and Wasdale are not part of them!

There is free parking in Seathwaite (with an honesty box for donations) but it fills up early. There is additional parking at the campsite and along the road at a push – however, the National Trust advises against road parking. Toilets are available at the trailhead.

The closest transport hub is in Keswick which has a coach stop from cities throughout England. The nearest bus stop to the Scafell Pike Corridor Route is in Seatoller – a mile north of the trailhead. You can catch the 78, 77, or 77A from Keswick.

How to Navigate on the Scafell Pike Corridor Route?

The Scafell Pike Corridor Route begins at the Seathwaite parking lot and campsite. The trail heads south, funnelling along the valley. The path then climbs up to Styhead Tarn, beneath Seathwaite Fell and Great Slack. 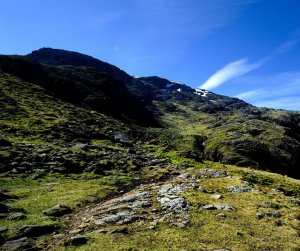 From here the path joins the Scafell Pike Corridor Route in proper and cuts sharply up the mountainside to Lingmell Col. The trail continues to wind through rocky outcrops, streams, and scree slopes. Eventually, the ascent tops off on the rocky plateau that marks the summit of Scafell Pike.

The trail then makes a short dip down into Broad Crag Col before climbing up past Broad Crag and Great End – two more summits to add to the checklist! At last, the trail drops into the valley and heads north along Ruddy Gill eventually arriving back at Seathwaite.

The quality of the trail changes throughout the hike. In places, the route follows a well-paved public footpath. In other areas, there is loose rocky ground and crumbling slabs of stone. The ground can also get very slippery in wet conditions. Mountaineers will have a field day, hillwalkers and lowland ramblers should expect an exciting challenge.

One of the hardest things about the Scafell Pike Corridor Route is its lack of clear waymarkers. This trail slips in and out of ridges and cols following a wobbling path up to the summit. In addition to this, the summit plateau is mostly absent of any trail markings.

Overall, this is a tough mountain ascent that navigates steep ridges, rocky cols, rolling crags, and winding gills. Snow is not uncommon during the winter months and steps should be made to prepare for variable weather conditions.

There are no technical sections on the Corridor Route. However, there are some small scrambles throughout the hike such as the “bad step”. Prepare to use your hands in places and expect difficult sections.

An ascent up the Scafell Pike Corridor Route requires all the standard hillwalking equipment. From good hiking boots to warm layers and waterproofs. Extras can include hats, gloves, and walking poles.

It’s a good idea to always have some emergency items in your backpack when hiking in mountainous areas. An emergency blanket, a whistle, a medical kit, and a GPS device can all be lifesaving pieces of equipment that are worth investing in. read more about “navigating when hiking in the UK” 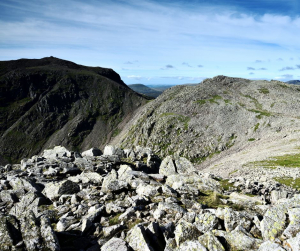 Seathwaite is essentially a small farm nestled in the basin of a valley. There are very few facilities there with no restaurants, shops, or cafes. The Flock-Inn Tearoom in Rosthwaite is a great spot for breakfast if you want to stop off before you start your hike.

After completing the Scafell Pike Corridor Route, you can head to the Glaramara Hotel for a sophisticated drink in their scenic garden. Alternatively, you should head up to Keswick for a wider range of options.

There are shops in Keswick should you need to grab any last-minute snacks for the hike. This is your final chance to stock up, so make sure you get everything you need. There aren’t any reliable water refill points at this moment so buy plenty of water for the hike too.

The conditions of this trail change dramatically throughout the year. During peak season (June – August) there will be plenty of other hikers at the summit and the weather should be more stable. In winter, you may need crampons or gaiters to tackle snow and ice at the peak.

High winds and heavy rain can strike at any time of year so check the mountain report and weather forecast before making any summit attempt. Often, there’s no phone signal on the mountain. If you’re relying on a signal to navigate, make sure you have a backup option such as a map and compass.

How to Hike the Snowdon Rhyd Ddu Path

How to Hike the Scafell Pike Wasdale Route
Scroll to top

Because these cookies are strictly necessary to deliver the website, refuseing them will have impact how our site functions. You always can block or delete cookies by changing your browser settings and force blocking all cookies on this website. But this will always prompt you to accept/refuse cookies when revisiting our site.