How to Hike the Snowdon Miners Track

Distance: 8 miles (there and back)

What is the Snowdon Miners Track?

The Snowdon Miners Track is a hiking trail in Snowdonia National Park, Wales. It is one of six main paths that climbs up Snowdon (also called Yr Wyddfa). This is the highest peak in Wales and the second-highest mountain in the British Isles. 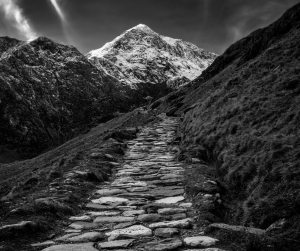 Climbing Snowdon is something of a rite of passage for British hikers. Many want to boast the claim of having summited the three highest peaks in the United Kingdom: Snowdon (Wales), Scarfell Pike (England), and Ben Nevis (Scotland).

The Snowdon Miners Track is one of the most popular routes used for reaching the summit. It is an 8-mile out-and-back trail and is considered a challenging route. However, like all the Snowdon hiking trails, this trail can be completed in a single summit day.

The Miners Track has an interesting history. It was originally built as an access route for the Britannia Copper Mine. Mining ceased around 1916 but there are still some relics from when it was in use such as a crushing mill and an old miner’s barracks. So as you complete your hike along the Miners Track you will also witness a sample of British history!

How to reach the Miners trailhead?

The Snowdon Miners Track is accessed from the Pen y Pass car park. Snowdon is situated in the northern section of Snowdonia National Park, Wales. This is a region of rugged mountain peaks, post-glacial valleys, and lakes. For this reason, it is difficult to access via public transport. To the north, the city of Bangor can be reached by train and bus from throughout Wales and England, but this will be a long journey requiring multiple changes. Many choose to access Snowdonia National Park by car to make the trip easier. The Pen y Pass car park is the main trailhead for the Snowdon Miners Track. You can catch the S2 and S4 busses to Pen y Pass as part of the Sherpa bus route if you don’t have use of a car. For those that are driving, make sure you book your slot in the Pen y Pass car park at least 24 hours in advance. The car park used to have pay and display machines, but those days are long gone. Due to high hiker numbers, booking in advance is the only way to secure a spot.

How to Navigate on the Miners Track?

At the Pen y Pass car park, you will notice signs pointing to two different hiking trails. The Miners Track and the Pyg Track. With your back to the road, make sure you take the left route out of the car park to join the correct trail.

The Pen y Pass car park is also home to a ranger’s centre, lots of information boards, and other public services. If you’re confused, there are plenty of people milling around who can point you in the right direction.

The start of the path is clearly labelled so keep an eye out for the sign marking the start of the trailhead. Initially, the trail winds its way around the lower valley beneath Snowdon. At the start, the trail is well paved with stone paths and wooden boardwalks.

The route then skirts around the edges of Llyn Teyrn and Llyn Llydaw. For this reason, it is one mile longer than its neighbouring trail the Pyg Track – although this means that the Pyg Track does have a steeper initial ascent. 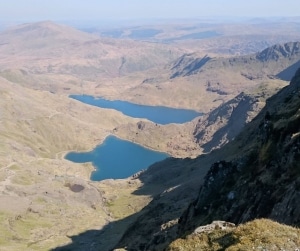 After Llyn Glaslyn, the Miners Track joins onto the Pyg track for a steep series of switchbacks up the back wall of Snowdon. The path then reaches a ridge near the summit of Garnedd Ugain.

The steepest section of the trail has now been completed. From here the Snowdon Ranger path, Llanberis Path, and Crib Goch trail all converge to follow the train track up to the Gorsaf Copa’r Wyddfa Summit Station. On a stone plinth next to this is the summit marker for Snowdon!

After reaching the peak, you can now celebrate successfully climbing the highest mountain in Wales. You’ll probably be surrounded by clouds, being battered by wind and rain, but it’s the achievement that counts! Head over to the visitor’s centre for a celebratory drink before retracing your steps back down the mountain.

The Snowdon Miners Track is considered to be one of the easier routes up Snowdon. However, this only applies to the first third of the trail where the initial section has a smooth gradient increase along a good trail.

There’s no escaping the steep ascent up the wall of Snowdon to reach the summit. Hikers should expect a challenge and be in a relatively good state of fitness.

Hikers attempting the Snowdon Miners Track should expect alpine conditions. It’s important to dress in layers with options for warm layers and waterproof outer clothes. Don’t wear a single bulky jacket as you’ll overheat on the ascent and start shivering at the summit.

Try to pack a fleece, jacket, and a waterproof shell. Bring a backpack with all the extra layers and plan for variable weather. You may need to switch between sun cream and a sun hat, to a fleece and gloves at the summit!

Make sure you eat a substantial meal before starting your attempt of the Snowdon Miners Track. The route shouldn’t take longer than 4-6 hours, so you won’t need overnight meals. However, you can still get fatigued during this time so pack a few snacks in your backpack to keep you fuelled on the trail.

Stretch in the car park before you set off up the Snowdon Miners Track. The hefty ascent can take quite a toll on the body. If you start the hike by stretching it will minimise the chance of strains or injuries.

Is it legal to ride an electric bike in the UK?

How to Hike the Snowdon Pyg Track
Scroll to top