What Happens if Caught Wild Camping in England?

Wild Camping in England is a complex beast. There is a whole range of old rules and newly introduced acts that make the picture as clear as mud. Technically, wild camping in England is illegal. However, there are numerous laws in place that support the public’s right to enjoy recreational activities on private land.

Sound confusing? That’s because it is. The whole act of wild camping falls into a blurred space. Hikers and backpackers from all over the country love pitching a tent in its wild places, but if you research the topic further, you’ll find out it’s illegal.

Are campers being reprimanded every night? Are innocent hikers being thrown in jail for breaking these laws? What are the actual consequences if you get caught wild camping in England? Let’s investigate a little deeper to find the answers.

You are allowed to wild camp in certain areas throughout England. The main National Park that permits wild camping is Dartmoor. There isn’t complete freedom to pitch where you want, but much of the park is open to campers.

Wild camping is restricted to small tents and for no more than 2 nights. No big groups or RVs are allowed. Make sure you research which areas are open to wild camping in the National Park, so you don’t pitch in the wrong area!

The Lake District is somewhat tolerant towards wild campers. Though they don’t expressively allow it, they provide some guidelines for wild campers to follow. Primarily, they encourage hikers to pitch high in the fells, above walls and away from towns. Campers should stay for one night in small groups and they must leave no trace.

Who Can Catch You? 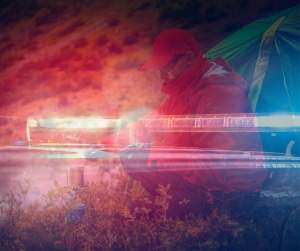 If you do get caught wild camping in England, who has the right to tell you off? This depends on where you’ve chosen to camp. If you’ve followed all the guidelines for wild camping, it’s unlikely this should happen. However, if you are more reckless with your camping spot, you may be noticed.

The most likely person to catch you wild camping is a farmer. 9 times out of 10, it is their land you are camping on. As a result, it is their property you are on, and it is their decision whether to kick you off or not.

What happens next is all down to you. If you are polite and explain the situation, they may let you stay for the night or point you to another spot they feel is more suitable. If you’re unlucky, they’ll ask you to move on and that should be the end of it.

If you’re camped near car parks or other settlements, you may be spotted by park rangers or parking wardens. In both cases, they will most likely ask you to move on or find a designated campsite. It’s possible that police may come across you, but this is rare. Not many coppers patrol the fells and mountains of England!

What is the Punishment?

Most of the time, you will simply be asked to move. That is generally as far as the situation goes. It is extremely rare for the situation to escalate above this unless there is a repeated offence or other issues are at play.

In a worst-case scenario, you may be dealt a fine. This is usually saved for the worst offenders, such as people who damage the land, gather in large groups, or cause extra disturbance to an area.

Unfortunately, these rules are most often used to stop squatters from settling. Illegal raves or communities that grow into permanent camps are the main targets for law enforcement. Although wild campers can brush shoulders with these groups, their attitudes are very different.

What Does the Law Say?

The reason very few people get in trouble when wild camping in England is because it operates under a warning system. Wild camping technically falls into the category of trespassing. This is a civil offence and is not punishable by arrest. 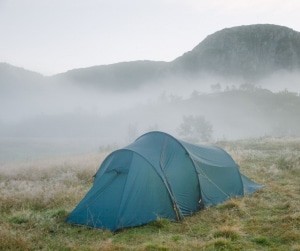 So, in most cases, the discrepancy is settled on the spot. The landowner whose grounds are being trespassed on asks you to leave and the matter is settled. The issue can escalate if the perpetrator refuses to leave or is a repeat offender.

At this stage, you may be committing an aggravated trespass which is a criminal offence. From here, the police can be called, and fines can be dealt, or arrests made. The maximum offence is 3 months in jail or a £2,500 fine.

But if we’re being realistic, how likely is that to happen? Even if you are extraordinarily unlucky, it is unheard of to receive a fine of more than £200-300. Ultimately, if a farmer catches you wild camping, be polite, stay calm, and offer to move on.

Is Wild Camping in England Worth the Risk?

It depends on your appetite for adventure. The chance of you getting into trouble when wild camping in England is extremely thin. If you do get “caught” the problem is often chalked up to a misunderstanding and all parties walk away unscathed.

Of course, there are risks when wild camping in England, but they aren’t so severe as to ruin all your backpacking plans. The best way to avoid trouble is to be respectful, follow the guidelines set out by the wild camping community, and be discreet.

If you are caught, don’t panic. Be polite and apologetic. Don’t let things get heated. It’s better to accept you’ve made a mistake. Appreciate that although it may seem like you’re camping in an empty field, you’re on the land that someone uses for their livelihood.

England is a small country. Land is contested by many groups of people. Hikers and backpackers are just another community that wishes to use the land for their enjoyment. Nature areas are to be shared and enjoyed by all. Don’t let that stop you from wild camping in England! Read More of our wild Camping blogs here

Can You Wild Camp Around Loch Ness?

Are GPS Devices Good for Wild Camping?
Scroll to top