What Is Wild Camping?

Wild camping is any camping trip that occurs in the countryside. It involves spending a night, often by pitching a tent or bivy bag, in a wilderness area. A wild camp is effectively any sort of overnight backpacking trip outside of a designated camping area.

Wild camping often falls into a grey area of legislation. Depending on the country or area you wish to pitch your tent, the rules about wild camping can vary dramatically. At its most basic, wild camping is about exercising your freedom to explore and sleep in a nature area.

Wild camping means different things in different countries. In Scandinavia and the Nordics, wild camping is welcomed and encouraged. Camping in the Westfjords and mountains of Norway is something of a national pastime with very few limitations other than the general acceptance by hikers to leave no trace.

In Canada and the US, wild camping is also a very common occurrence. However, things are changing in most National Parks. Permits are becoming more common with hikers having to pay to wild camp with a registration necessary.

In the UK, the attitudes to wild camping are mixed. With a smaller landmass and a dense conflict over land use, the lines are blurred. In Scotland, wild camping is legal. However, in England, everywhere outside Dartmoor National Park is illegal. Although, the story is far from as clear cut as this. read our Wild Camping in Dartmoor Article

In 1975, the Freedom to Roam Act became federal law. This allowed for recreational activities on private land. This is especially important in England where many of the National Parks are on private land. For example, it’s estimated that the Yorkshire Dales National Park is 95% private farmland. 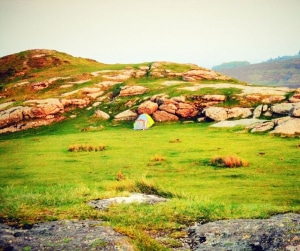 However, this act did not stretch to include camping, which can only be done with the landowners’ permission. Across Europe, this simply put an already ancient understanding of land use into law.

Some countries sought to further improve rights to recreation and passed further bills. The UK passed the Countryside and Rights of Way Act in 2000 which improved the public’s right to roam and introduced more freedoms. The Scottish went a step further in 2003 with the Land Reform Act. This explicitly included the right to wild camp for recreation.

What Does it All Mean?

Clearly, there’s a lot of legal jargon and a complex network of rules that are in place. But what does this all mean? Essentially, wild camping is completely legal in Scotland, but it’s frowned upon in England and Wales. Wild camping is officially illegal but there are laws in place to protect the public’s freedom of recreation on private land.

Anyone who isn’t a lawyer will likely be scratching their heads right now. If you look on the front cover of many hiking magazines in the UK, you will see an incriminating image of a tent perched on top of a fell in the Lake District which is an apparent breach of the law.

You’ve now found out the dirty little secret. Wild camping in England, Wales, and Northern Ireland is technically breaking the law! So how is it that so many people get away with wild camping and what can you do to responsibly join this community?

The most official way to go wild camping is to ask for the landowners’ permission. You will need to open an OS map, search for a wild camping location, research who owns that area of land and contact them to ask for permission. Alternatively, you can arrive on the day and ask the local farms if they can help you find the owner.

This will absolve you of any wrongdoing. But let’s be honest, how many people are actually going to go through this process? It’s the right thing to do but, in practice, it’s a bit overly officious. If your tent is pitched on an isolated peak in the Carneddau, you’re hardly going to be thinking about the landowner’s permission. 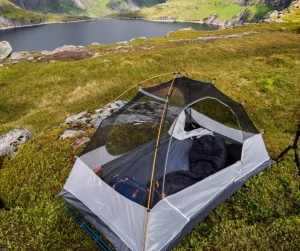 Another way to follow the rules is to head to Dartmoor National Park in Devon. Wild camping is allowed in certain areas of the park if you follow a strict set of rules. You must carry your own equipment and should stay no longer than two nights. No big tents or large groups are allowed, and you need to stick to designated locations. Find out more here

Doesn’t sound much like wild camping, does it? Camping in a designated spot isn’t so different from staying at a campsite. The rules in Dartmoor seem to take a bit of the fun out of wild camping and certainly dampen the adventurous spirit.

At the end of the day, people all over the UK want to go wild camping. There is an unwritten rulebook of ways to achieve this without stepping on anyone’s toes. In most cases, if you’re discrete, everyone will turn the other way.

A good wild camping tip are:

Most important of all, leave no trace. This is the biggest way to ensure wild camping can continue for everyone. Don’t spoil the natural environment and try to leave your camp spot exact as you found it – unspoiled.

This may sound scary but ultimately, authorities aren’t out to get you. The rules are in place to make sure everyone can enjoy the environment. Be responsible, treat nature areas with respect, and your wild camping adventures can continue without a problem.

Can You Wild Camp Around Loch Ness?
Scroll to top