What Load Cartridge is Best for Clay Pigeon Shooting?

Clay pigeon shooting is a respected and well-recognised sport enjoyed by countless enthusiasts and professionals around the world, and it’s been a mainstay in the Olympic games since 1900.

Since the dawn of the sport’s inception, it’s been regarded as a high-concentration, tense, and physically challenging sport, one that many find helps to keep them fit and mentally dexterous.

There’s a distinctive culture surrounding the sport, and it’s evolved a great deal in recent years, leading to many regulations and rules regarding equipment and etiquette to adapt in the process.

One of the most important elements of the sport, the load cartridge, has taken many forms in the past, but the fundamentals remain somewhat unchanged.

Whether you’re a shooting enthusiast wishing to take up clay pigeon shooting for the very first time, or you’re wondering which load cartridge you should take on your next outing to the range, it’s worth taking a look at which load cartridge will suit you best. Here are some points to help you do just that. 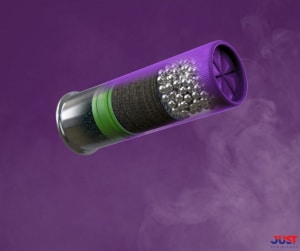 Inside the cartridge you’ll find a wad. This is the piece of material positioned in-between the shot load and the powder, acting as a buffer that creates a gas seal. This gas seal prevents the load from mixing with the powder and ensures that the load is propelled forward.

Choosing the right kind of wad is important, as many ranges and shooting grounds will have strict rules surrounding which material you can use.

Historically, wads were made out of materials like cork and fibre, and this was the case until the introduction of plastic wads in the 1960s.

While plastic wads are still incredibly popular worldwide, in the UK, plenty of ranges and grounds are starting to ban them outright for environmental reasons.

It’s important to find out what style of wad your range accepts before purchasing your shells. The style of the wad may also change the performance of the cartridge. For example, the plastic wad tends to have better gas-sealing capabilities, potentially resulting in a more concentrated shot pattern, but it’s only a small difference, if not insignificant when compared to high-quality fibre wads.

The shot load size refers to the number of pellets inside the cartridge, and while you’ll need to stick to the current regulations, you can choose whichever kind of cartridge works best for you.

The maximum shot you can load currently stands at 28 grams for domestic shooting disciplines.

An inverse numerical scale is used to specify the cartridge, a size 10 (a skeet shooting cartridge) being the smallest, and 1 being the biggest. Then beyond number 1, the scale uses the letters SG and BB, which are used primarily for hunting animals. 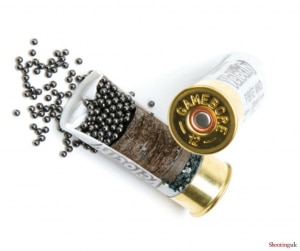 A bigger shot will be able to travel much further without losing its energy, but if you’re shooting clay pigeons, you won’t require that much power to shatter the clay. Plus, a larger shot has a wider pattern spread since there are fewer pellets in the cartridge.

A smaller shot won’t travel as far, but it’ll usually offer less recoil and the spread will be denser, making sizes like the 7.25 and the 8 more desirable for disciplines like English skeet shooting, where the targets are closer together and moving incredibly quickly.

Suffice to say, the ideal choice depends on what you’re shooting at. You’ll also need to think about how comfortable you’ll be with shooting a large number of shells over time. Consistency is important, and a larger, heavier shell might be physically difficult to control over a longer duration.

While size 8 cartridges will be able to take on more or less any target on a domestic range, you could think about switching to a lower number like a 7.5 if you need the extra distance. You might also wish to think about loading one of each depending on the movement of your targets.

It’s best to stick to a single brand, as this will help you get used to the way the cartridge feels to shoot. If you’ve been practicing with a certain cartridge while you wait for your license, it’s worth sticking to it for now to get a better understanding of the playing field.

There are plenty of different shooting disciplines in the UK. Some of the more popular ones are Down the Line, English Skeet, and single barrel, but on the majority of ranges, the shot load limit for domestic disciplines is 28 grams.

The largest shot size permitted on most ranges is 6, and most cartridges being used will be 28 grams, but you can get lighter loads, these being the 21-gram and 24-gram cartridges (with the same shot size).

Lighter loads are used for plenty of Olympic disciplines, with the maximum load permitted being 24 grams and 21 in many cases.

A lighter load means less recoil since there are less pellets in the cartridge, so for those of you just starting out in clay pigeon shooting, it may be worth investigating.

It’s important to note that a size 7.5 cartridge with a 21-gram load will travel faster than a 7.5 with a 28-gram load, so making the right choice all depends on who you are as a shooter.

For example, if you want a smoother swing and you’re having trouble with recoil because you have a slight build, a lighter load may be the one for you.

The Size of Your Chamber

As long as you don’t ever fire a cartridge longer than the chamber of your gun, you shouldn’t go too far wrong.

This means you can happily fire shorter cartridges with ease, and you shouldn’t need to worry about the size of your chamber differing from the shell.

Most guns now have a chamber of 2 ¾”, but some older models are 2 ½”, so it’s important to find out which one you have.

The largest gun you can use is a 12 gauge, but if you’re not up for the power of that yet, a 20 gauge is a superb place to start your shooting journey.

Should Hiking Trousers be a Loose Fit?
Scroll to top