What is Wicken Fen?

Wicken Fen is a Nature Reserve in Cambridgeshire, England. It is the oldest National Trust reserve in the UK and a highlight of the British countryside. This 255-hectare site in East Anglia is famed for its unusual ecosystem. A fen is a peaty wetland that is fed by mineral-rich surface water. Fens form over thousands of years and they are hotspots for biodiversity.

In England, Wicken Fen is a particularly rare landscape as nearly all the wild fens have been destroyed to make way for arable farming. This is a lovely nature area for walks and wildlife spotting with a particular emphasis on birds and plant life.

There are many habitats to explore at Wicken Fen, from reed-beds and grasslands to woodlands and waterways. The area is also a Site of Special Scientific Interest, a Special Area of Conservation, and a Ramsar Site. With land use stretching back to Roman and Medieval times, Wicken Fen is of both historical and environmental value.

How do You Get to Wicken Fen? 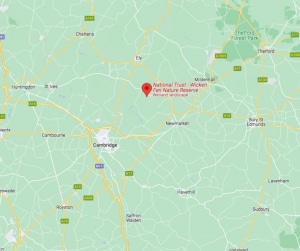 Wicken is a small hamlet northwest of Cambridge. Its main access points are via country roads. Driver’s coming from the A10 or A142 can reach Wicken Fen from the A1123. There is a National Trust car park which is £3 for the day or free for members.

The fastest route to Wicken Fen is by car but public transport is possible. Soham and Ely are the closest train stations which are connected by Greater Anglia trains. The 117 bus stops in Wicken but the route is slow and waiting times can be long.

Wicken Fen is not free to enter, and travellers must purchase tickets from the visitor’s information centre. The Boardwalk, Woodland Walk, and Summer Nature Trail all require ticketed access.

Bikes can be hired from the National Trust to explore the wider area of Wicken Fen via the Lodes Way. The National Cycle Network Route 11 is a popular bike trail and offers a great way for visitors to experience the reserve. Hiring a bike is £9 for adults and £5.50 for children. All cycle hires last for 2 hours.

What to See at Wicken Fen?

There are over 9000 species of flora and fauna in Wicken Fen. Many visitors come to the wetland just to experience this diverse array of wildlife. Due to an accessible boardwalk, it is easy to venture into the heart of the fen amongst the waterways, wildflowers, and grass meadows.

Amongst the reeds, you may spot hen harriers, water voles, and bitterns. There are 5 species of warblers (an endangered animal on the Red List Species), 22 species of dragonfly, and 20 species of butterflies. Wicken Fen is a carefully maintained ecosystem and the introduction of grazing highland cattle and herds of Konik ponies also help to regulate these habitats.

Wicken Fen has been closely managed for many generations. Sedge cutting has occurred since the early 15th century and is used to thatch local cottages to this very day. The historic wooden windpump, built in 1912, is used for drainage and is a must-visit site in the wetlands. 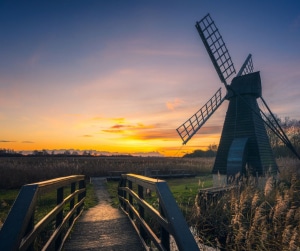 The shortest trail through the heart of Wicken Fen is via the boardwalk. It takes in two water pumps, the Roger Clarke Hide, and the Boardwalk Hide. The Seasonal Nature Trail is another excellent choice but only in the summer as the path follows a waterway around Sedge Fen.

On this trail, you pass two more wildlife viewing platforms at Verrall’s Hide and Tower Hide where you gain an aerial view over the wetlands. The Seasonal Nature Trail also passes the Godwin Plots, a special ecological area that has been used continuously for scientific experiments since 1927.

Branching out, the Adventurers’ Trail crosses through St Edmund’s Fen and loops around The Mere past Adventurers’ Fen and Baker’s Fen. The trail includes the East and West Mere hides with the possibility to extend the walk to Charlie’s Hide and Baker’s Fen Hide.

Wicken Fen is a fantastic place to visit for a picnic on a summer’s day. You can either pack your own lunch or visit one of the onsite cafes to pick up refreshments. The Lapwing Café is a small coffee shop near the car park that specialises in hot drinks.

The Docky Hut café offers a wider range of hot and cold food options, snacks, cakes, and drinks. In the village of Wicken, the Maids Head Wicken is a popular local pub with a thatched roof and outdoor lawn seating. Five Miles From Anywhere No Hurry Inn is another pub on the banks of the River Cam that serves tasty pub-grub in a riverside setting.

Wicken Fen is a very seasonal place to visit. In winter, much of the surrounding woodland will be bare and the wildlife will be less active. The paths can also become muddy and waterlogged so wearing waterproof boots or wellies is advised.

During the spring and summer, the waterways come to life with birds and wildflowers. The gushing meadows are magnificent in the sunshine and the weather is ideal for cycling and walking. Be sure to time your visit to coincide with these seasons!

In the summer, visitors should also carry sun cream and sun hats as the walkways are rather exposed. Polarised sunglasses can shield your eyes from water reflection and allow you a glimpse into the aquatic life beneath.

If you’re an avid birdwatcher, make sure you bring a pair of binoculars and an identification book and plan to spend a few hours bird-spotting from the hides. That’s the best thing about a nature area like this, everything can be enjoyed at a slow and steady pace to truly embrace the wild.